Hello blogfam!!
I am back, this time full time......! I am done with my exams Yipppppppppppppppeeeeeeeeeeeee, and I have two more days before I resume work!!......so, blogging here I come. I will blog till hell breaks loose SHM......, did I just say that??
Anyway, I have a lot to blog about, I wrote my last paper on Friday and that same day was the handing over as well as send off for the final year students....! how I wish I was part of those who graduated,......hmmmm, hopefully my time will come soon. took some pictures hope u enjoy watching.....them!!!!
here we go!!!!!
This is all I have for now but keep watching this space, a surprise could spring up soon, no one knows........! have a great week you all and a blessed one too:-)))

so much to talk about

Hei guys,
To say I have missed you will be an understatement, in fact, I have more than missed you all very much. If there was another way to say it, I would have done that already lol!

Sorry for my absence, had a lot to deal with, anyway, now am back and blogging again!!! okay! so here are the stories I have for you today, the past two weeks have been kind of busy for me, because of my impending exams then which I have started writing already and also because my best friend was a running mate for a contestant contesting for the SRC (student representative counsel) as vice president and yours truly turned herself into a campaign manager lol. well.... we did our best but unfortunately we lost and life still goes on......!

Politics is not something I really like but had to help out because of my dear friend. Student politics is so funny, I am saying funny because of the way people can talk about anything and everything in order to get peoples attentions, some of the slogans were "light over darkness" the unique one" amongst others...... so the one I caved was "Going straight to the top" I took some shots which I will very much love to share with you but then my flipping internet is so slow and hope to do that later.

The long and short is that, my friend, even though lost out does not mean she is out. So she is moving on and I know and believe above the sky is going to be her limit, she is rising and will still rise to surprise.They have not heard the last of us..........! lol

Away from that, 16th June was my birthday and OMG the calls, Messages and Facebook wishes were just too many, did not know I had so many well wishers. I was overwhelmed with the surprises I had from everybody. Anyway I got a new beautiful phone which I can do everything on so I  am taking my internet modem and the service providers to the cleaners, Yes I am!!!!! I have suffered enough in their hands....!
I did not have a party but a small drink up with friends and family and Like joke, Like joke I dey grow be that oo! will try and bring you more pictures later.

Moving further, this weekend has been a very quite one for me, this is because although the Sociology exams dealt with me quit a hard one, I came back home to meet an empty house, smh' this is because my people went for an enjoyable weekend somewhere in the Caribbean. How? well not the Caribbean exactly but almost, because they are having so much fun without me and poor old me is all home alone.

So, I woke up this morning and decided to cook myself a nice meal, got inspired by the nice food my girlfriend served her boyfriend and myself last night. I enjoyed the food to the fullest and woke up this morning craving for that so I prepared it. Trust me people it was fun although lonely but not bad at all to have some time for ones self!!!!!


To conclude, this past weekend the 11th of June, was the burial date of my cousin who died at 33years. We buried him and I thank God everything went well and my aunty is doing fine. A few friends came around to sympathize with me and I must say I am very grateful to all of them for coming.
These were some of the pictures I managed to take

Ekow Smith Asante and Kofi Adjorlolo are the two famous faces of Gollywood, who were banned alongside the controversial sultry star actress, Yvonne Nelson, late last year. And it is no longer news that Ekow and Kofi, have been left off the hook while Yvonne is yet to be pardoned.

The decision, which SS reliably gathered had sent close colleagues and fans of the sexy screen siren on the war path with the movie producers in Ghana. SS scoop that Yvonne’s several alleged incidents of disrespectful and rude attitude towards fellow actresses, producers and crew members on location and off-camera, were what earned her a year ban. While Yvonne seems to be unperturbed with the ban, as she recently float her fashion and Lace Wigs line called YN’s Closet.
A source hinted SS that in order to draw a battle line with the so called Gollywood mafias, faction of the association movie producers in Ghana are learnt to be making plans to bankroll a movie that will star Yvonne. Moreover, SS has also gathered that some diehard fans of Yvonne have initiated a lift the ban on Yvonne campaign in Accra.

Since its debut on air the One Show on VIASAT 1 has hosted a select core of Ghana’s mainstream movie stakeholders to discuss at length possible ways of giving the industry, a facelift.

All agreed that given the gradual but impressive pace of improvement the industry is experiencing, it would be proper to adequately match that goodwill with international best practices and an equally good local system to take care of the inefficiencies. However they came down heavily on recent trends of nudity in modern Ghanaian movie. Adjetey Annan bemoaned the superfluity of nudity in the Ghanaian movie industry and feared that if the trend continues, Ghana can’t compete favourably with the other markets. “An actor/actress has his/her culture and image and the part to be played in a movie, to protect. Our movie industry is falling short. With this, we cannot compete with the top class movies and will still remain at the bottom,” Pusher said.

Yvonne Okoro, Ecow Smith Asante complemented Pusher’s argument by pointing out that the industry is gradually drifting off and called on all filmmakers to understand that movies are meant to inculcate good morals and culture into the people, the basic essence of production, and nothing else.

This discussion comes barely a week after the Information Ministry called on the Ghanaian Movie industry to put in place strong systems in order to strengthen its activities. Deputy Information Minister Baba Jamal complained that although movies were powerful tools that influenced and impacted lives, current trends in Ghanaian movies were nothing to write home about.

"We are gradually losing our culture and identity as Ghanaians because of the negative ways in which we portray ourselves in our movies”.

Nana Ama McBrown In Photos Like You Have Never Seen Before…

more on our Ghollywood stars, check pictures of Nana Ama Mac-brown in a recent photo shoot. she is looking good right !!!, but someone should please tell her to loose some weight like I am trying to do now!! lol!

MORE NEWS ON GHOLLYWOOD
checkout more news on our very finest stars of Ghollywood, for those of you who never knew that Majid Micheal is married, pls check this out. He is so married with two kids. enjoy the pictures i got from ghanacelebrities.com

i still can't believe pascaline edwards has really cut off all her locks, gosh!! well check out this photos of her with and without the locks.
which one would you rather hit? her before or now?

I love Nollywood actors and actresses, that is why I keep talking about them most of the time. I came across these few pictures of some of them with their kids and thought I could share with you my readers.
please enjoy yourselves.
More on Nollywood, I still managed to get more pictures of some of our very own hot guys in the industry and was able to come out with this. Check them out, hope u like them. Who would you rather hit among the guys?? who's hot, who's got the swag? and who is sexy?

what do you guys think of Yul? he is cool right?


Gideon okeke of tinsel fame. I like his acting.
okay guys, that is all for now. enjoy yourselves!!!!
Posted by Priscy at 13:27 6 comments:

hello blogfam,
Big Brother Africa has been ongoing for some time now. The trills twist and fun is just amazing, these two lovebirds Enerst and Bhoke pictured below were seen having sex. The two were evicted last Sunday!

hmmmm! what do you guys think about this big brother reality show? is it being helpful at all in any way?
Away from that sex news, In fact I don't know if the new trend in Nollywood is to loose weight, am saying this based on the fact that a lot of our Nollywood stars especially the ladies are doing some serous work in order to keep shape which I am also working very hard to achieve SMH (scratching my head). check out Ini Edo in a recent photo shoot in which she went topless. You like?? 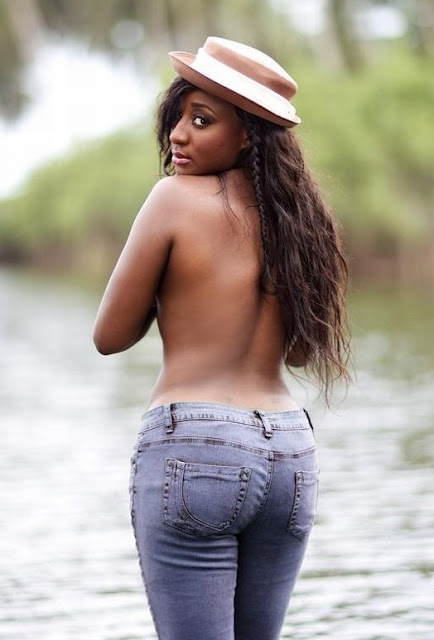 check this pix out of Genny in a topless photo shoot. what do you guys think?